This is the eighth Report of PJSC Rostelecom (the Report) representing the Company’s sustainability initiatives from 1 January 2018 to 31 December 2018. Rostelecom has historically adhered to an annual reporting cycle, with the previous Report issued in 2018 following the reporting year 2017. For other reports see the website.

This document is the Company’s stakeholder communication tool for customers, shareholders, employees, business partners, government authorities, local communities, and public organisations, as well as a corporate development tool aimed at increasing the Company’s transparency and public accountability, taking into account a wider range of non-financial risks, as well as sustainable development goals.

The Report has been prepared in accordance with the new Sustainability Reporting Standards of the Global Reporting Initiative (the GRI Standards:  Core optionOn 19 October 2016, the GRI Global Sustainability Standards Board (GSSB) published the new Sustainability Reporting Standards.). The Company monitors the development of non-financial reporting and relevant global trends. While preparing the 2018 Report, Rostelecom took into account key provisions of Directive 2014/95/EU of the European Parliament and of the Council as regards disclosure of non-financial and diversity information by  certain large undertakings and groupsDirective 2014/95/EU on disclosure of non-financial and diversity information. in particular, methodology and information disclosure indicators.

Since 2017, PJSC Rostelecom has included information on its contribution to the United Nations Sustainable Development Goals (UN SDGs) in the Report. The same approach is also applied in this Report (see the Building a Sustainable Digital Future, Investing in Our People, Investing in Society, Fostering a Safe and Favourable Environment, and Delivering High-Quality Services to Customers sections). We seek to bring Rostelecom’s development strategy more in line with the UN SDGs in respect of environmental, social, and economic matters, which is reflected in the text of the Report. In 2018, the Company prioritised the list of SDGs to identify the areas where it could contribute the most: Goals 4, 9, 10, 11, and 16. While prioritising the SDGs, we were mainly focused on the targets which are the most aligned with the Company’s industry specifics and strategy, as well as its stakeholders’ interests.

The Report comprises key information on the economic, environmental, and social aspects of PJSC Rostelecom’s operations, including the description of the following focus areas:

There were some changes in disclosure of several topics in 2018. This is due to several factors:

At the same time, several topics which proved to be less important for the stakeholders following the materiality assessment and had already been disclosed partially or in full in previous reports, were not disclosed in a detailed way in this Report.

We sought to make the Report useful and concise by avoiding duplication of information and added links to additional sources of information including the Annual Report, PJSC Rostelecom’s official website, and other publicly available relevant documents.

The Report covers the activities of Rostelecom Group as a whole, including PJSC Rostelecom and its subsidiaries within the consolidation boundaries for the Company’s annual (financial) reporting.

No significant changes were made to the 2018 Report compared to the previous reporting periods in terms of boundaries and scope (disclosure of economic, social, and environmental topics).

While determining the Report’s content, PJSC Rostelecom was guided by the GRI Standards. Appendix 5 comprises a GRI compliance table which contains relevant information on the GRI disclosures.

The comments and recommendations of the RSPP Board on Non-Financial Reporting, which had been received following the assurance of the 2017 Report, were considered during the preparation of the Report.

When defining material topics to cover, we were guided by the  GRI StandardsMaterial topics are the topics reflecting the organisation’s significant economic, environmental, and social impacts, or having substantive influence on the assessments and decisions of stakeholders. Source: GRI Standards. and:

In 2018, in addition to the above-mentioned stakeholder engagement tools, PJSC Rostelecom held a survey and a dialogue to discuss the concept of the 2018 Sustainability Report. The comments and recommendations received during the discussion were considered while preparing this document (for more details see the Stakeholder Engagement section). In the future, the Company plans on improving its approach to incorporating the stakeholders’ opinions in its non-financial reporting.

The quality of the Report is assured through applying the following principles outlined in the GRI Standards:

PUBLIC ASSURANCE OF THE REPORT

The document was assured by an independent party – the RSPP Board on Non-Financial Reporting.

The Company will take into account RSPP recommendations and comments received during the public assurance of the 2018 Report and incorporate them into its future non-financial reports. 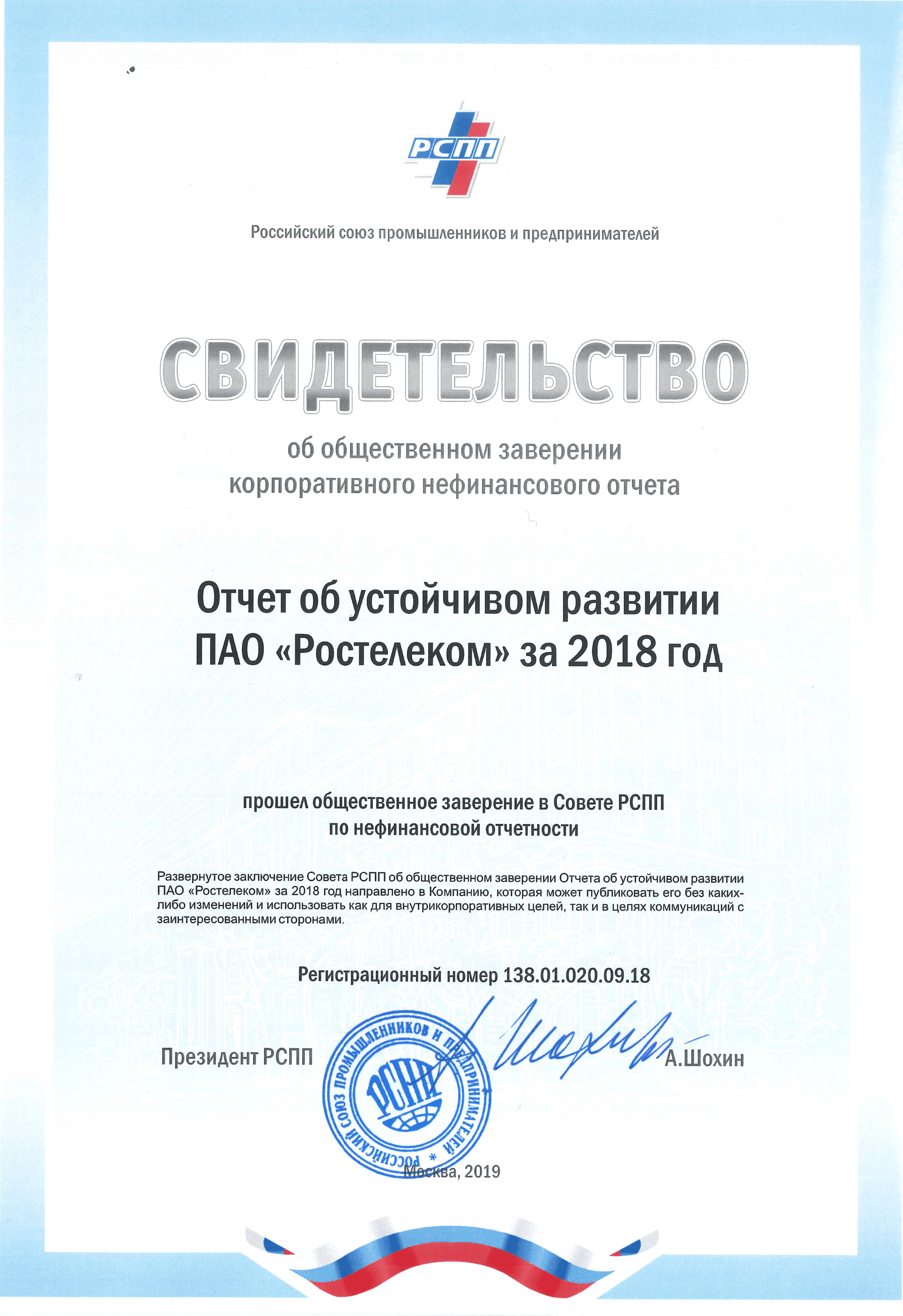